The 4 types of teeth and the structure of your mouth play important roles in your ability to eat, speak, and stay healthy. Most of us take our teeth for granted — until something goes wrong. Not only do our teeth help us chew and digest food, they also play an important role in speech, and impact our health overall. By brushing up on your dental health knowledge, you’ll be taking the first step toward giving your teeth the attention they deserve.

How much do you know about your pearly whites?

The Development of Teeth 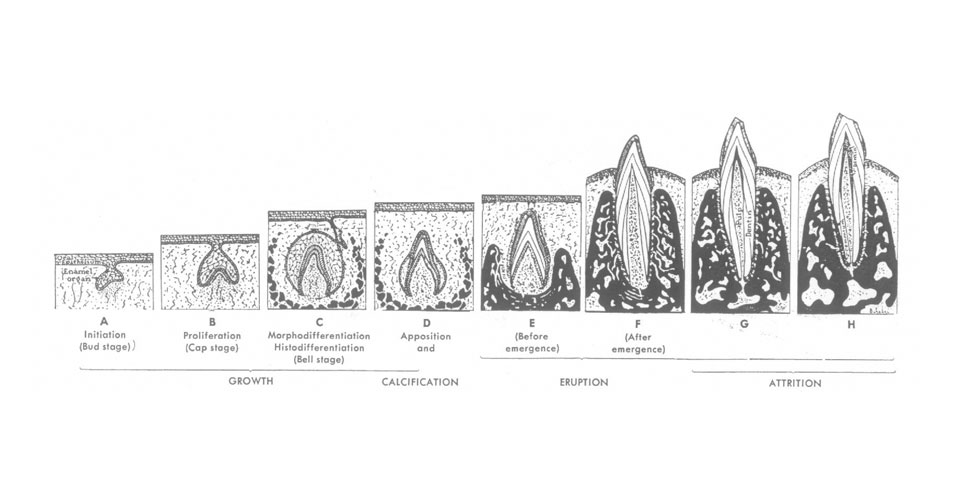 Humans have two sets of teeth: primary (or baby) teeth and permanent (adult) teeth, which develop in stages. Although the timing is different, the development of each of these sets of teeth is similar. Here are some facts about how the teeth develop:

The Parts of the Tooth

A tooth is divided into two basic parts: the crown, which is the visible, white part of the tooth, and the root, which you can’t see. The root extends below the gum line and helps anchor the tooth into the bone. Your teeth contain four kinds of tissue, and each does a different job. These include:

Enamel. This is the visible substance that covers the tooth crown. Harder than bone, enamel protects the vital tissues within the tooth. Enamel is made up of hydroxyapatite, phosphorous, and calcium.

Dentin. Underneath the enamel you find dentin, which is calcified and looks similar to bone. Dentin is not quite as hard as enamel, so it’s at greater risk for decay should the enamel wear away.

Cementum. This tissue covers the tooth root and helps anchor it into the bone. It’s softer than enamel and dentin; the best way to protect this softer tissue from decay is by taking good care of your gums. Cementum has a light yellow color and is usually covered by the gums and bone. But with inadequate dental care, the gums may become diseased and shrink, exposing the cementum to harmful plaque and bacteria.

Pulp. Pulp is found at the center and core of your tooth and contains the blood vessels, nerves, and other soft tissues that deliver nutrients and signals to your teeth.

and What They Do 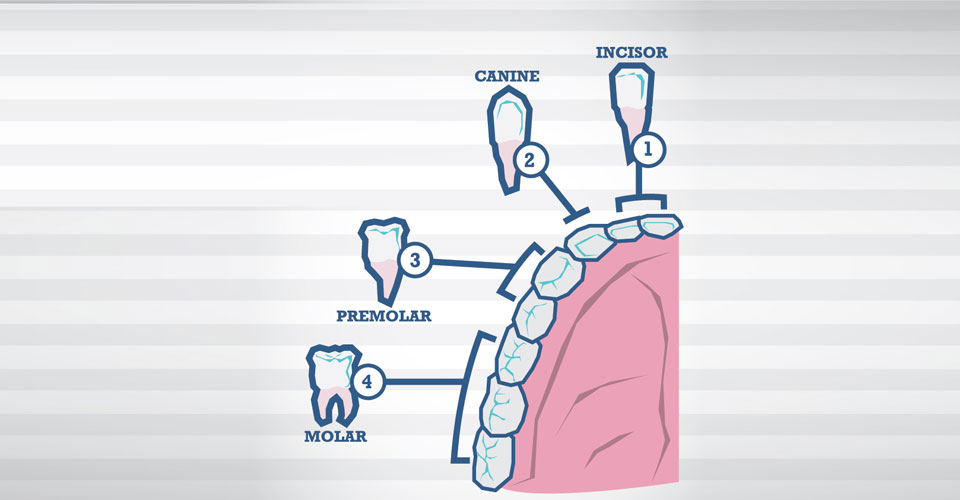 Teeth help you chew your food, making it easier to digest. Each type of tooth has a slightly different shape and performs a different job. Types of teeth include:

Incisors. Incisors are the eight teeth in the front of your mouth (four on top and four on bottom). These are the teeth that you use to take bites of your food. Incisors are usually the first teeth to erupt — at around 6 months for your baby teeth, and between ages 6 and 8 for your adult set.

Canines. Your four canines (fangs) are the next type of teeth to develop. These are your sharpest teeth and are used for ripping and tearing food apart. Primary canines generally appear between 16 and 20 months, with the upper canines coming in just ahead of the lower canines. In permanent teeth, the order is reversed, with lower canines erupting around age 9 and the uppers arriving between ages 11 and 12.

Premolars. Premolars, or bicuspids, are used for chewing and grinding food. Adults have four premolars on each side of their mouths — two on the upper and two on the lower jaw. There are no primary premolars; the first premolars appear around age 10, with the second premolars arriving about a year later. These take the places of the first and second primary molars (described below).

Molars. Molars are also used for chewing and grinding food. Primary molars, also known as deciduous molars, appear between 12 and 28 months, and are replaced by the first and second premolars (four upper and four lower) described above.

The permanent molars (also four upper and four lower) do not replace any primary teeth, but come in behind all of them, further back in the jaw. The first permanent molars erupt at around age 6 (before the primary molars fall out), while the second molars come in between ages 11 and 13.

Third molars. The third molars are commonly known as wisdom teeth. These are the last teeth to develop and don’t typically erupt until age 18 to 20. Some people never develop third molars at all. For those who do, these molars may cause crowding and need to be removed. If they don’t fully erupt they are said to be impacted, and are commonly removed.

Your mouth is important, so don’t take your teeth or oral health for granted. “For good dental health, brush and floss your teeth regularly, don’t smoke, eat a healthy diet, and see your dentist regularly for dental cleanings and checkups,” advises Lal. A healthy mouth makes for a healthy body — and a pretty smile.